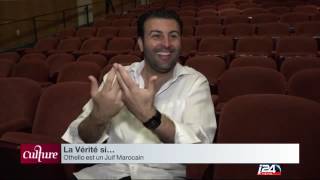 DAVID SERERO starring as OTHELLO in NEW YORK this June

THE MERCHANT OF VENICE by William Shakespeare Starring DAVID SERERO as Shylock in a Sephardi style... THE MERCHANT OF VENICE by William Shakespeare will be presented in a Sephardi style featuring songs of the era. Following its success in June 2015, this production is returning on the stage of the Center for Jewish History for 4 more performances: Janurary 13th (3pm), 17th (7pm), 19th (8pm) and 21st (3pm). Tickets: asfmerchant2016.bpt.me or 1 800 838 3006 Tickets a

William Shakespeare's classic THE MERCHANT OF VENICE will be performed in New York on June 10th at 3pm (Preview), 14th at 7pm (Opening), 22nd and 24th at 8pm 2015. International baritone and actor DAVID SERERO will play the lead role of SHYLOCK. Located at the Center Jewish of History, the A.S.F promotes Jewish Sephardi culture. This Merchant of Venice production will adapted into a sephardi style featuring Jewish ladino music of the era. It's a world premiere adaptation. Whe