DON GIOVANNI coming Off-Broadway this June starring David Serero as Don Giovanni DON GIOVANNI, opera by Mozart, will be performed this June at the Center for Jewish History (15 West 16th St. New York NY 10011), starring David Serero as Don Giovanni along with an international cast. Don Giovanni is perhaps one of the most famous operas of all time, written by Mozart with a libretto by Lorenzo Da Ponte. This new production will include an international cast of world renowned op 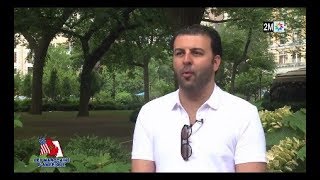 The RUSSIAN CABARET NIGHT featuring baritone and entertainer DAVID SERERO plays this summer at ONEGIN Restaurant Located in the heart of the Village, the ONEGIN restaurant is a Russian venue. Highly praised by the New York Times, this iconic Russian restaurant is delighted to announce to host the RUSSIAN CABARET NIGHT featuring the baritone and entertainer David Serero. The evening is a dinner theatre basis including a 3-course meal and a unique David Serero performance of Ru

David Serero to perform at the Israel Parade of New York

David Serero in CRIME SCENE: DO NOT STOP by Katia Huang

http://www.thejewishweek.com/special-sections/sephardim-new-york/paying-vocal-homage-his-roots Paying Vocal Homage To His Roots by TED MERWIN When David Serero’s great-grandfather, who was the chief rabbi of Fez, would stroll through the streets of the then-capital of Morocco, both Jews and Arabs would rise to their feet in his honor, according to Serero family lore. A century later, Serero, an acclaimed opera singer, is in the midst of exploring his family heritage by impart
1
2